We accept donations of used eyeglasses and shoes for service clubs

Posted on September 7, 2018 by Michael Lope under Our communities
Leave a comment 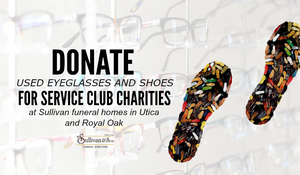 Our funeral homes in Utica and Royal Oak accept in-kind donations for several charitable organizations. Both buildings’ lobbies have boxes where people can drop off used eyeglasses for the Lions Club and gently-worn shoes for Kiwanis.

We also accept worn U.S. flags for ceremonial disposal. They are burned with military veterans who are cremated.

Since our founding more than 100 years ago, Sullivan owners have encouraged their staff to volunteer with service clubs. Royal Oak funeral directors Dick McLaughlin and Sherry Marshall and Utica’s Ray Lope belong to their local Kiwanis clubs. Third generation owners Bill and John Sullivan and Raymond Lope are longtime Rotarians.

“Few businesses are as closely tied to their communities as funeral homes,” said Sullivan co-owner Michael Lope. “We give back in many ways, including giving our professional staff the time to attend meetings, serve in leadership positions and work on volunteer projects like the eyeglass and shoe donations.” The military service of John and Ray; John’s son, Jim, and several other Sullivan employees informs the organization’s commitment to proper flag disposal.

International organizations buy the shoes from Kiwanis for a modest fee, creating jobs for repair people in countries of need. Local Kiwanis clubs donate the proceeds to global needs like maternal and infant tetanus and to local projects like a Macomb County park’s playground equipment that is accessible to children of all abilities.