Posted on August 7, 2018 by Admin under Our staff
Leave a comment 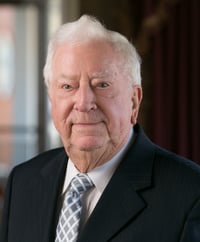 At 95, Sullivan Funeral Homes’ Richard McLaughlin is probably Michigan’s oldest practicing funeral director. He comes to work Monday through Friday. Every day that he isn’t playing golf. Or bowling. Or in Las Vegas with his son playing blackjack. Or entertaining his grandchildren. Oh, and if he’s needed on the weekend, well, he’ll be there then, too.

“Dick is amazing,” said Sullivan co-owner Michael Lope. “We are a 112-year-old business and he is its heart. He has been with us since September of 1953 and has worked with all four generations of the Sullivan family.”

In 1988 Dick retired and the Sullivan family presented him with a black Pontiac Grand Prix convertible in tribute for his years of service.

Over those 65 years, Dick has served generations of families at the Royal Oak building.

“I just like the ability to take care of somebody when they’re in trying times,” he said. “To take care of everything and make sure it’s right, so they don’t have to worry about anything. I just love doing that; making sure that everything is what they wanted it done. Over two or three days visitation they become friends for the rest of your life.”

If you want to know how the funeral industry has changed in the past half century, ask Dick.

By far the biggest change has been the number of people choosing cremation. Once it was 3 or 4 percent of the business, now it is over 50 percent. Cremations make it possible for families to delay ceremonies, so Dick sees more families choosing a later memorial service instead of a visitation and immediate funeral. Even those who do choose the latter often shorten the process from the traditional two days of visitation with a funeral on the third day.

Funeral rooms used to be filled with up to 100 flowers; today 30 is a lot.

The funeral industry itself is changing, too.

“There are certainly more women in the business today and that’s a good thing,” he said. “They were really needed.”

The work schedule is changing, too.

“When I came here I worked until 10 at night. I went home but if we got a call I was back here. I had to embalm during the night and sleep upstairs.” A new generation of young professionals is driving a trend toward more regular work hours.

Dick was married twice, the second time for 42 years. He has four children, seven grandchildren and six great grandchildren.

Minus one grandson, Dick’s entire family celebrated his 95th birthday with him on August 3.

Dick is Sullivan’s leading pre-need counselor. He helps people plan their funerals and find the right way to set aside funds to pay for it and encourages everyone to make these plans.

He refers to the information and resources available on the Sullivan website and says, “Even if you don’t pre-pay, get it down on paper. Do it for your kids, so they know just how much mom and dad want to spend, what they want, what kind of service.”