Posted on August 19, 2019 by Admin under Funerals
Leave a comment 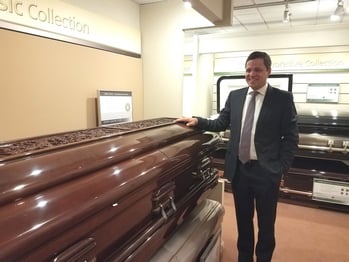 John F. Kennedy was buried in a version of this casket model.

In our Royal Oak display room you’ll find our newest casket, with a military theme, and our oldest, the stunning Marsellus M710 FTH President model.

For more than 130 years, the Marsellus Casket Company in Syracuse, New York made what came to be called the Rolls Royce of caskets. The M710 FTH President was the top of the line and you can see one of the few remaining available at our Royal Oak facility. It has a hand-carved top with a velvet lining. The regular M710 model has a smooth top.

When Marsellus closed in 2003, their last casket was a 710 President. It is now displayed in the National Museum of Funeral History.

It takes up to 350 board feet of lumber to build a fine casket. The process of molding it into a solid-wood finished product takes about eight months, including time to dry or season the wood. Fine hardwood caskets are hand-assembled, then hand-rubbed and finished with four to five coats of lacquer to bring out the beauty of the wood. 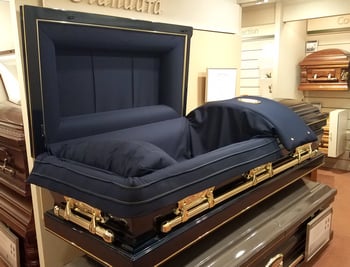 The lining, in blue or black, is made from the fabric used for military and public safety uniforms.

Our newest casket option, available both in Royal Oak and Utica, is the Freedom Midnight. Made of 18-gauge blue steel, it’s lined with the same wool fabric used to make military uniforms. It’s suited to veterans of the Air Force, Navy, Coast Guard and police departments. The Patriot Ebony, black with a black wool lining, serves Army, Marine Corps and fire fighter veterans.