Posted on May 7, 2018 by Admin under Cemeteries, Funerals, Green burial, Our communities
Leave a comment 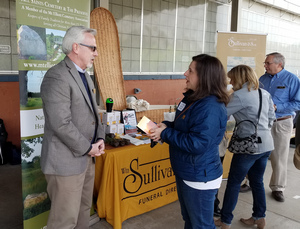 Russ Burns from The Preserve with an Earth Day visitor

Sullivan Funeral Homes and The Preserve cemetery raised awareness of green burials during the April 21 Earth Day event at the Royal Oak Farmer’s Market organized by the Royal Oak Environmental Advisory Board.

Sullivan co-owner Mike Lope and Jim Stark joined Russ Burns from the Preserve displayed a biodegradable casket, handed out information about the only Michigan cemetery certified by the U.S. Green Burial Council. and gave away white spruce seedlings to visitors. 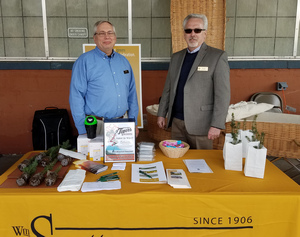 Sullivan’s Jim Stark with Russ Burns from the Preserve

“We had a great turnout or folks who were truly interested in getting information on a subject that intrigued them,” Mike said. “There were several people who had never heard of green burials and those who had heard about them were interested in educating themselves. Overall it was a great day that hopefully helps the Earth too!”